Home › Company Culture › Remember everyone is an expert in Marketing

Remember everyone is an expert in Marketing

Posted on July 1, 2014 by Michael Donaldson The Value Innovator 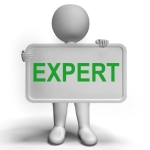 Wise words from an MD over 20 years ago as we drove away from our Divisional office having just pitched a TV campaign to the Divisional board. Earlier in our meeting, I’d learnt the importance of “knowing when to bite your tongue” – with the assist of a kick under the table; as the Divisional MD announced the advert needed a “jingle” at the end of it, “you know, like that little red phone that drives over the hill sounding its horn in a catchy way… de de de de deeee” and there you had it. He couldn’t  explain why the ad needed it, but in his opinion it was lacking something and that was a catchy finish of some sort.

This was at a time when the majority perceived marketing to be about selling stuff with colourful packaging and catchy TV advertising. When everyone was exposed to hundreds maybe thousands of marketing messages everyday, which qualified them as experts.  Today,  it would be the same as someone qualifying as a Social Media expert on the strength of a Facebook account and LinkedIn profile.
As the youngest of the traditional seats around the boardroom table, for which you need no formal qualification to practice and is continually morphing  – yesterday it was about products and services,today it’s about engagement and experience – it’s hard for many to define, which creates doubt around its actual value.
Marketing has suffered from a smoke and mirrors image, in part by over selling the dream, known affectionately as “spin” but also through the over use of “jargon” which has made it more difficult for some to understand, it’s too conceptual, compared to Finance,Production or Sales. Though in the words of Einstein “If you can’t explain it simply, you don’t understand it well enough”.
“The only known in marketing is the cost” along with the oft repeated quote about “half the money I spend on advertising is wasted” has made the  marketing budget harder to defend and it’s still seen in many organisations as a discretionary budget and the first to be cut in recessionary times. I much prefer the quote from Henry Ford who said  “a man who stops advertising to save money is like a man who stops the clock to save time”
Marketeers if you remember everyone is an expert in marketing then your life will be less stressful,and far easier if you practice the 5 principles of KYC – Know your Colleagues:
1. Listen
2. Acknowledge
3. Respond (in plain English)
4. Keep it short
5. Offer to follow up outside the meeting, when you can share a little more of the science of marketing with less of the subjectivity!

About Michael Donaldson The Value Innovator

Since 2013 I have been helping ambitious SMEs with their Strategic and Leadership challenges.